The statements on this website have not been evaluated by the Food and Drug Administration. These products are not intended to diagnose, treat, cure, or prevent any disease.

From Aches and Pains to Thriving: How Stephanie Increased Her Healthspan in Her 60's

Find out her longevity secrets. 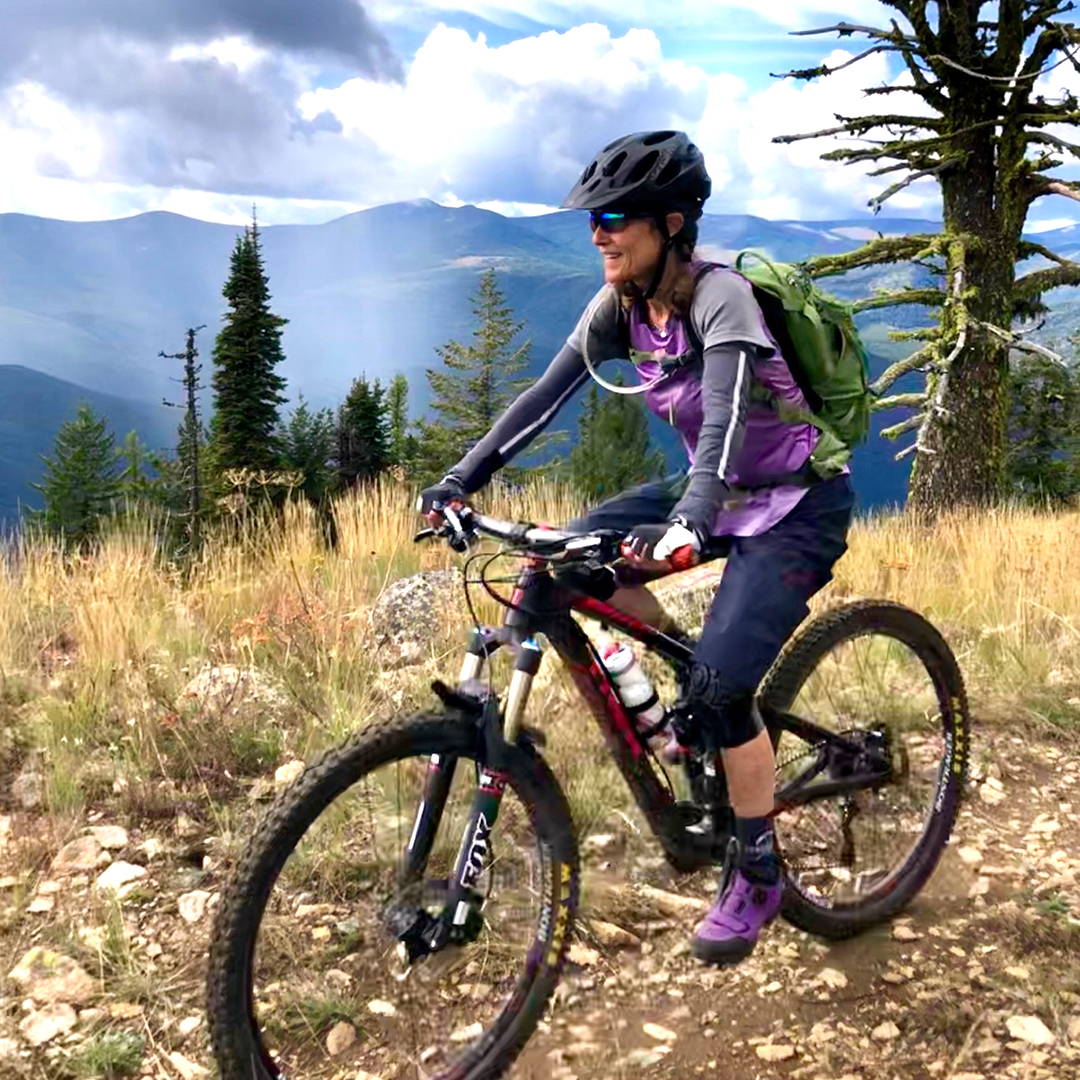 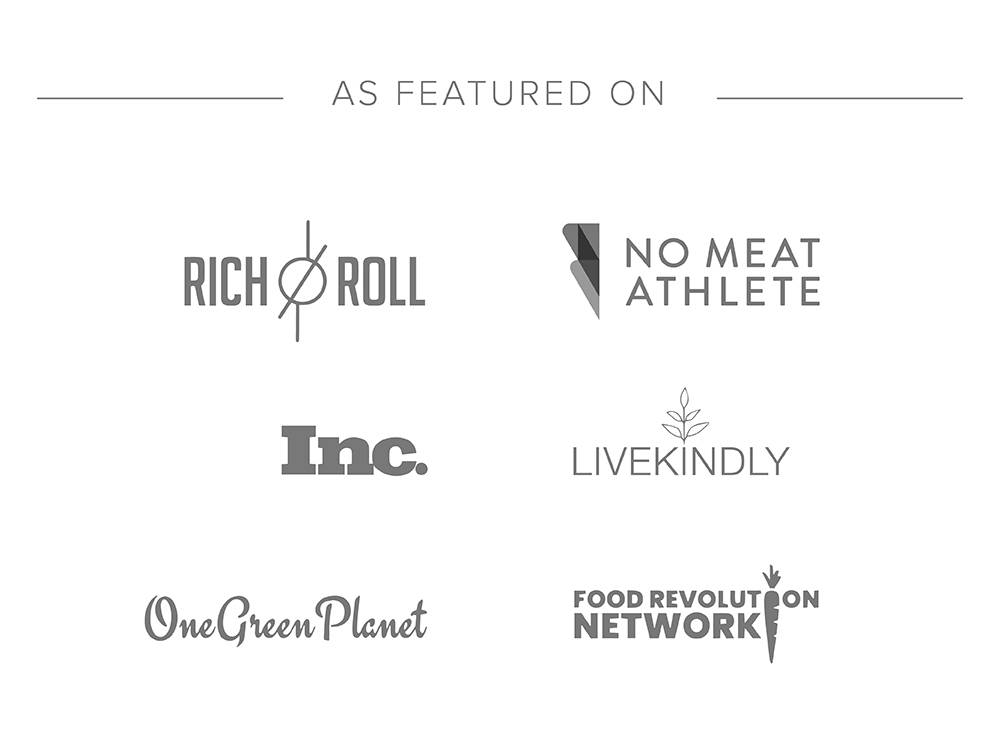 At 68 years of age, Stephanie Sloan knows she still has a lot of life left to live.

But she also refuses to take anything for granted.

Forty years ago, Stephanie was a professional skier, competing around the world in a variety of disciplines. She felt invincible.

But as happens with each passing year, things got tougher.

Stephanie began experiencing aches and pains she had never had before.

And her energy waned, making it harder to enjoy the active lifestyle she had grown accustomed to throughout her life.

"I guess this is life after 60," she told herself.

But something didn't sit right.

Stephanie knew that even as she aged, there had to be more she could do for long-term health…

To “slow” the aging process.

Gradually, her mindset shifted from "this is part of aging," to "let's take action for my longevity," and she got to work. 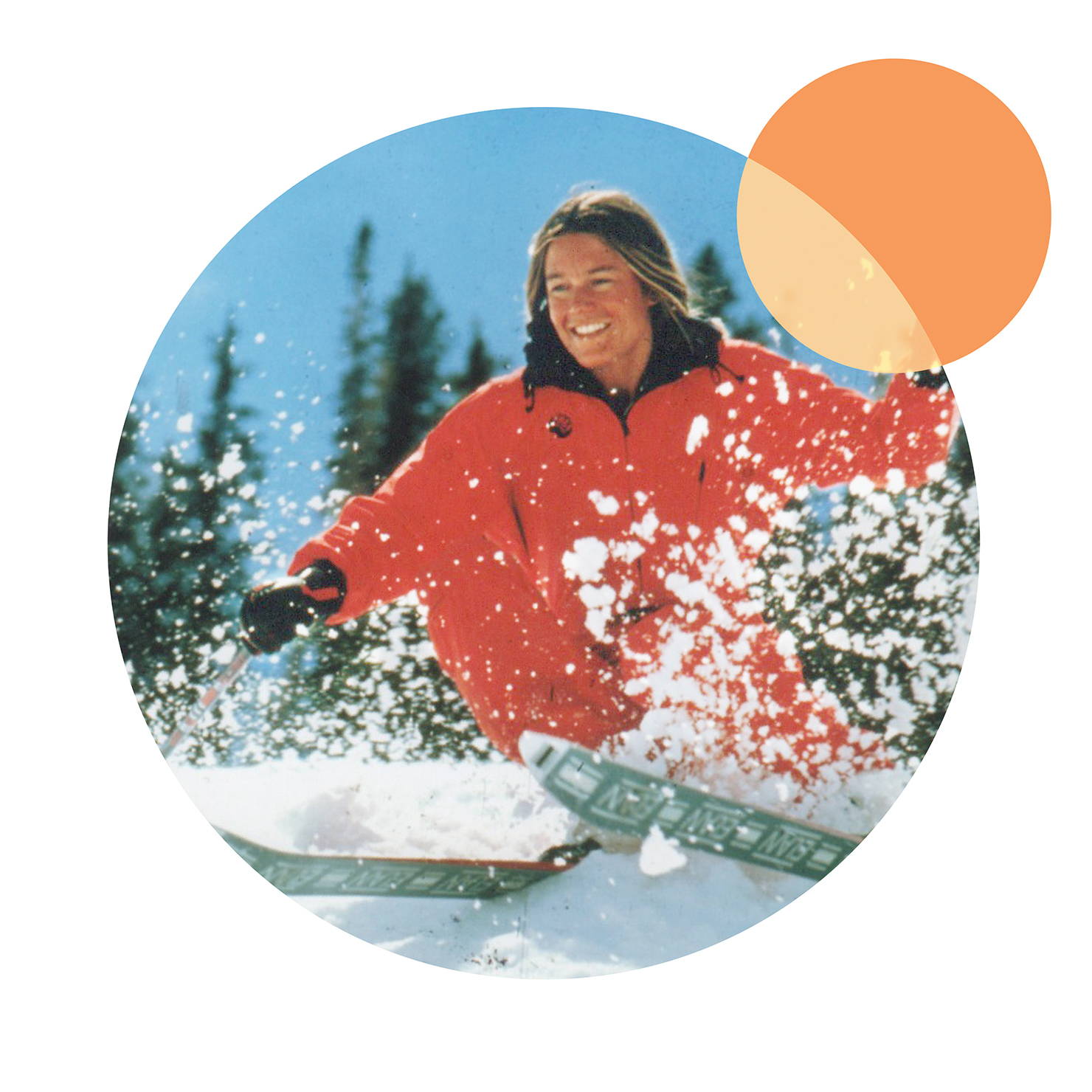 To support her mom, Stephanie's daughter shared books by Dr. T. Colin Campbell, Dr. Garth Davis, and Dr. Will Bulsiewicz, each highlighting the long-term health benefits of a plant-based diet. Benefits like:

Each of which resonated with her deeply.

And as she read the stories of transformation and studies behind each benefit, Stephanie decided this was the action she had been looking for...

Four years ago — at the age of 64 — she made a life-changing decision for her long-term health.

Not for ethical reasons or for the environment — although those align perfectly with her values — but because the research clearly pointed towards eating a plant-based diet for longevity.

"Almost immediately I noticed improvements to my health.

The aches I had grown accustomed to went away, and the 5 pounds I struggled to keep off disappeared. I felt sharper and lighter, and I started to have so much fun discovering new foods and flavors."

But even after feeling confident it was the right thing to do, she continued to do her research.

That's when Stephanie discovered what might be missing from her plant-based diet.

Vitamins B12, K2, and D3, along with magnesium, selenium, zinc, iodine, and DHA/EPA omega-3 fatty acids are all hard to come by in standard plant foods.

And missing out on those nutrients could not only reduce the benefits, but introduce a wide range of other health issues.

“I advise testing for nutrients like vitamins B12 and D, iodine, magnesium, zinc, and omega-3 fatty acids, and supplementing routinely for those that are commonly found to be low for plant-based eaters.

Don't think of adding nutrients as a flaw in the diet, think of it as a complement to the healthy foods you're already eating to ensure you’re experiencing all of the long-term benefits of a plant-based diet.”

So Stephanie began to look for a solution.

Her best option at the time seemed to be the "piece-meal" approach, managing multiple bottles of vitamins and minerals, just to get what you need.

Then her daughter once again came to the rescue… 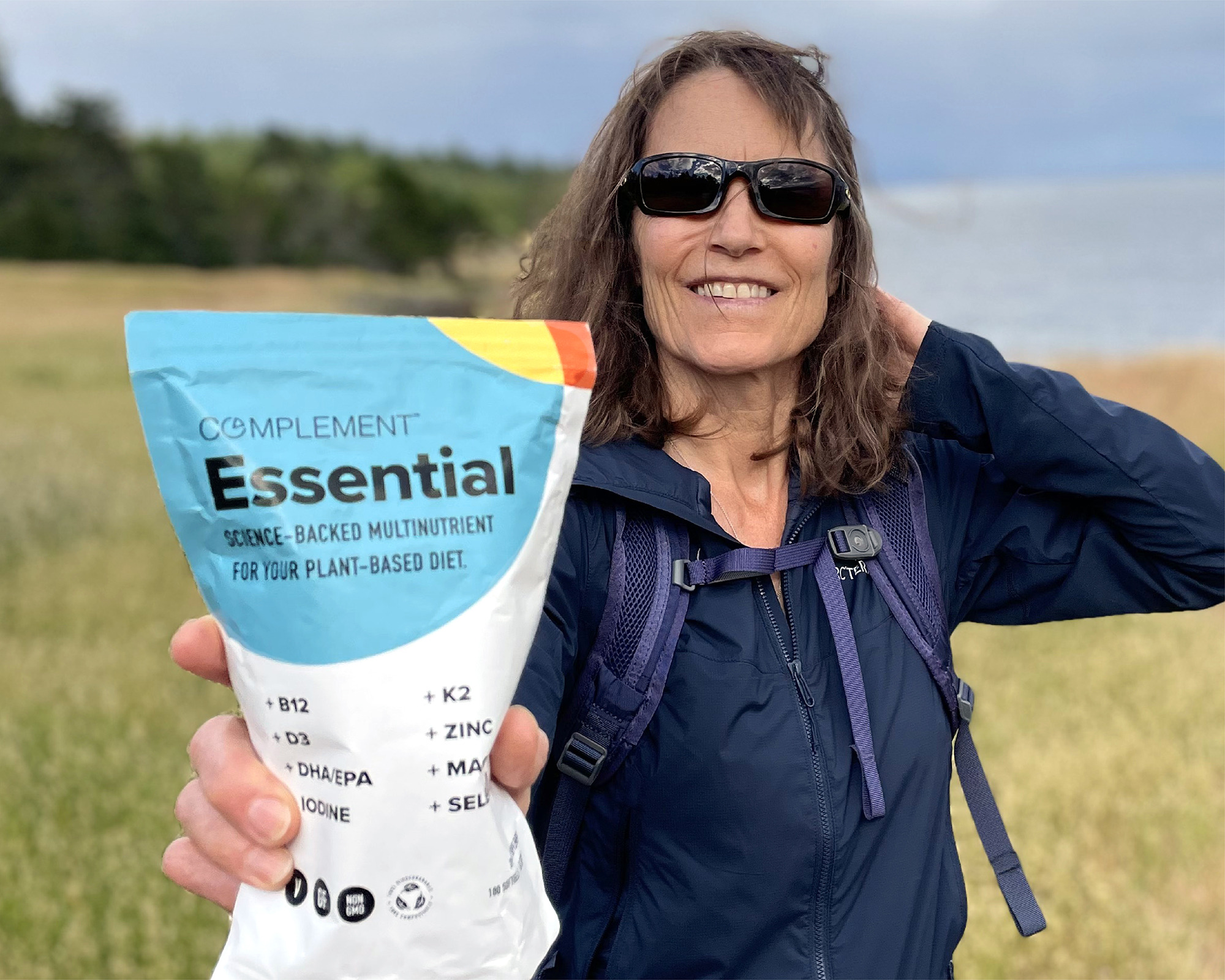 Introducing the all-in-one supplement designed to eliminate deficiencies in a plant-based diet.

Through her daughter, Stephanie was introduced to a plant-based multi-nutrient called Complement Essential , designed specifically to fill the common nutrient gaps in a plant-based diet:

Each of these was critical to ensuring Stephanie was not only experiencing the short-term benefits of a plant-based diet, but properly complementing it for her long-term health and well-being.

"I take Complement Essential because it's so well-rounded.

It also gives me peace of mind so I don't have to worry about things like vitamin B12 or vitamin D. I live in Canada, so D is hard to get all year round."

Near her home in Canada, she not only continues to ski, but also hike, cycle, row, and enjoy the mountains nearly every day.

⁠"I'm so glad I was introduced to the plant-based diet. 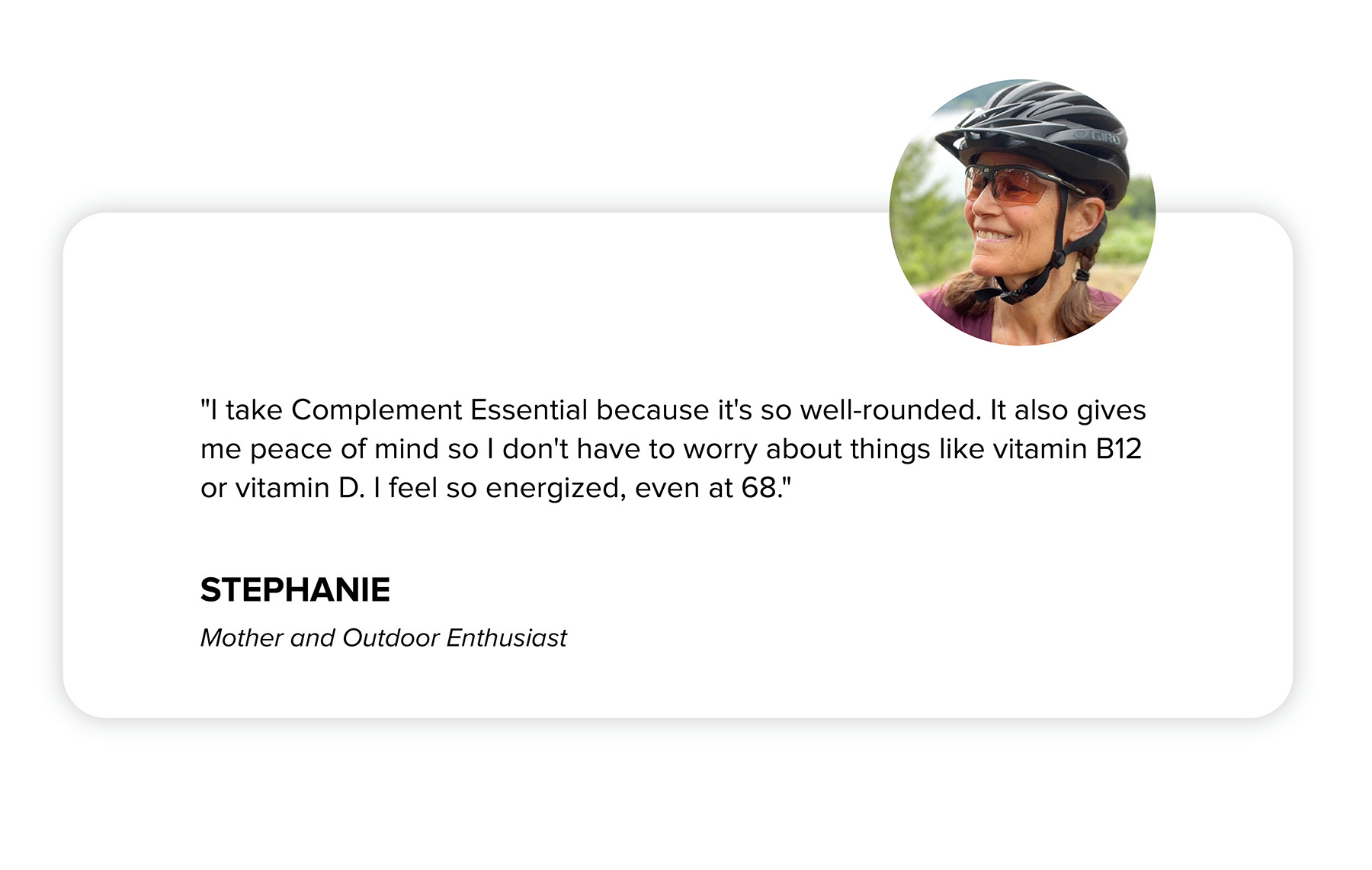 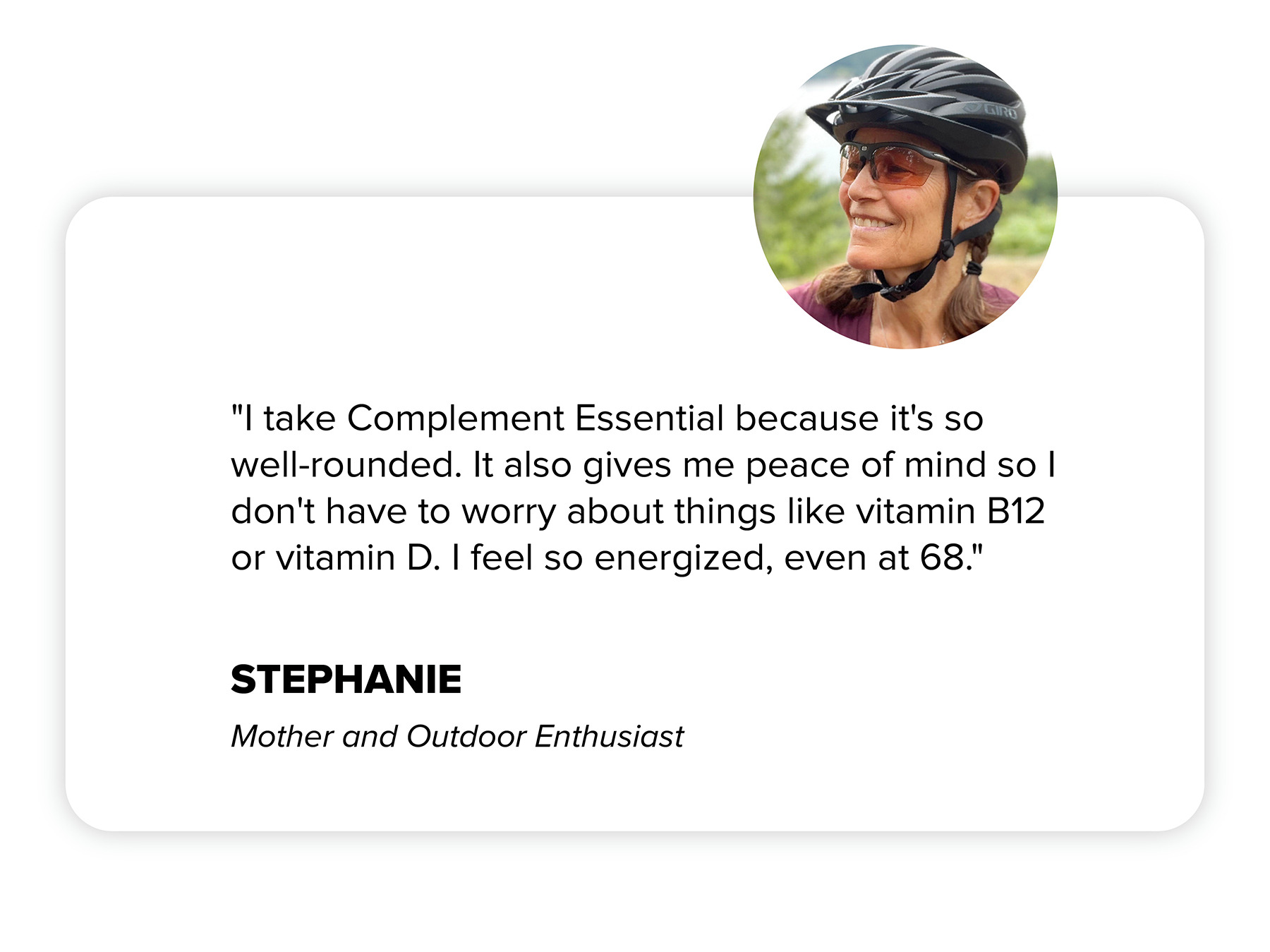 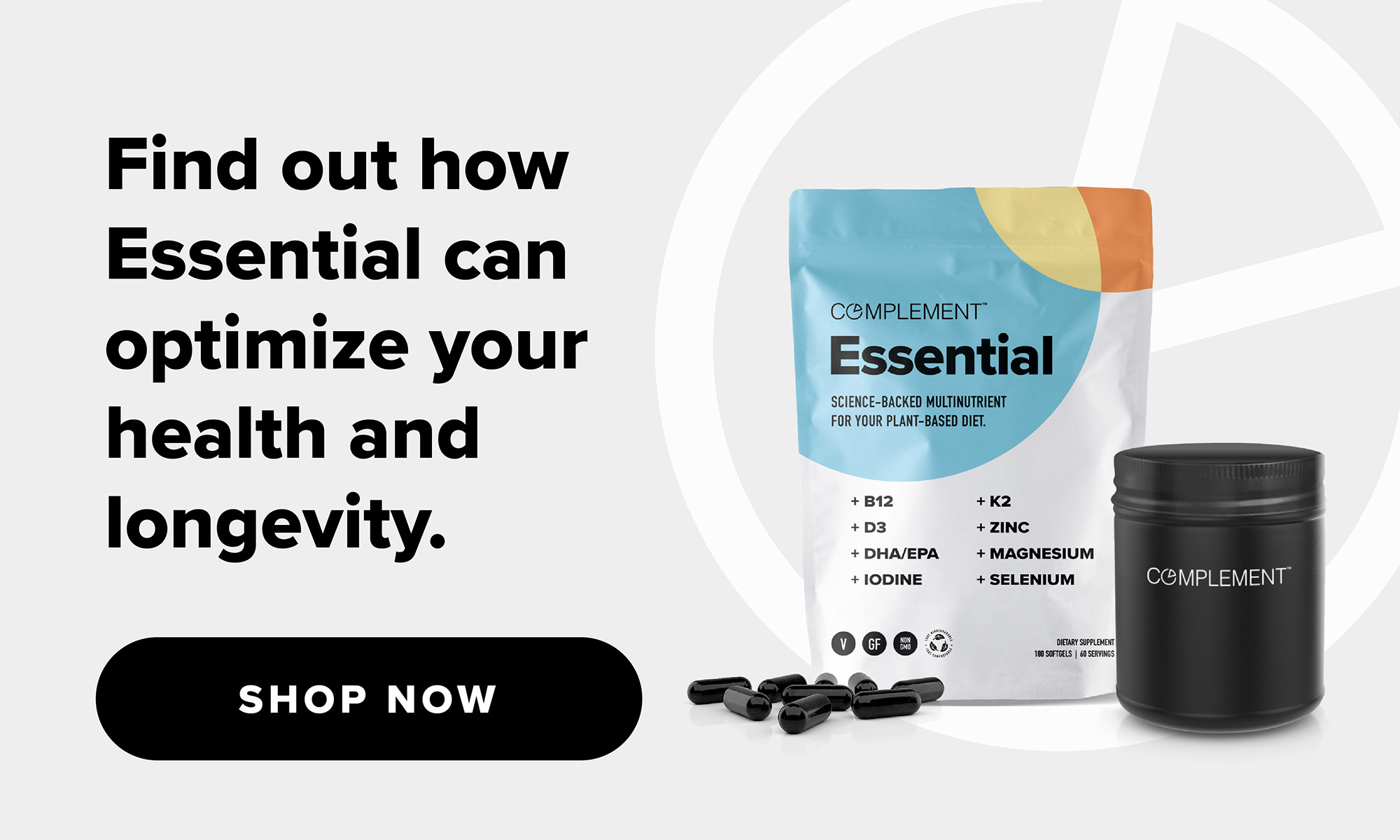 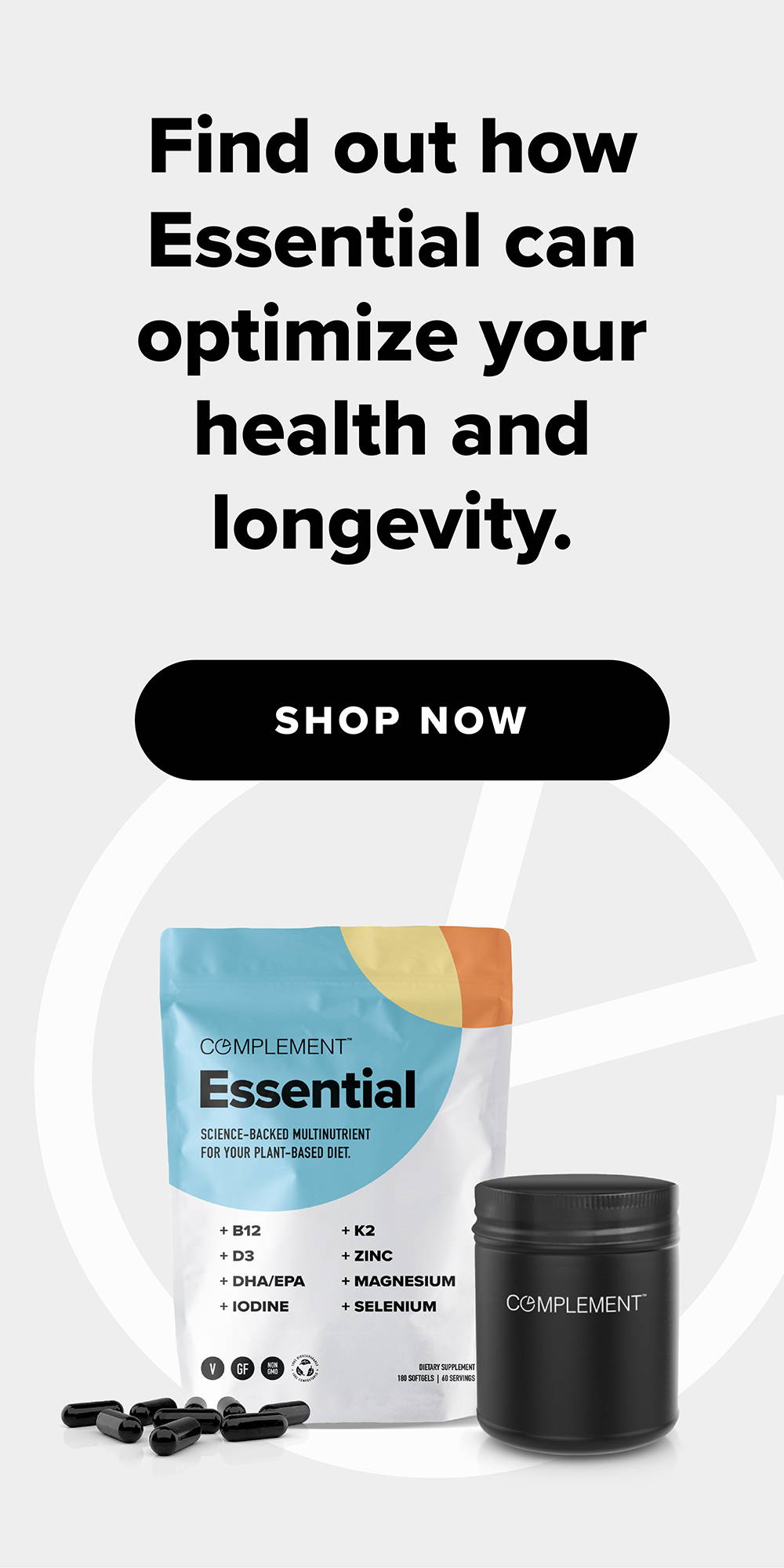 How is Complement Essential different from other multivitamins?

Most multivitamins take the "more is more" approach, throwing in dozens of cheap vitamins and minerals in absurd dosages.

But if you eat a diverse diet, you don't need all those nutrients. And the megadoses either go to waste or could cause harm.

All-in-one solution
No more juggling multiple supplements to get everything you need.

Optimized dosages.
The 8 science-backed nutrients most commonly lacking in a plant-based diet — vitamins B12, D3, and K2, plus DHA/EPA omega-3s, magnesium selenium, iodine, and zinc — in dosages optimized to support your long-term health.

Triple testing of each batch.
From individual ingredient potency to final product, each batch is triple-tested so you know exactly what to expect with each bottle.

What makes Complement Essential exceptional isn't that it's a magic bullet or ingredient you're hearing about for the first time on Facebook...

It's how the formula is designed to perfectly complement your already healthy plant-based diet. 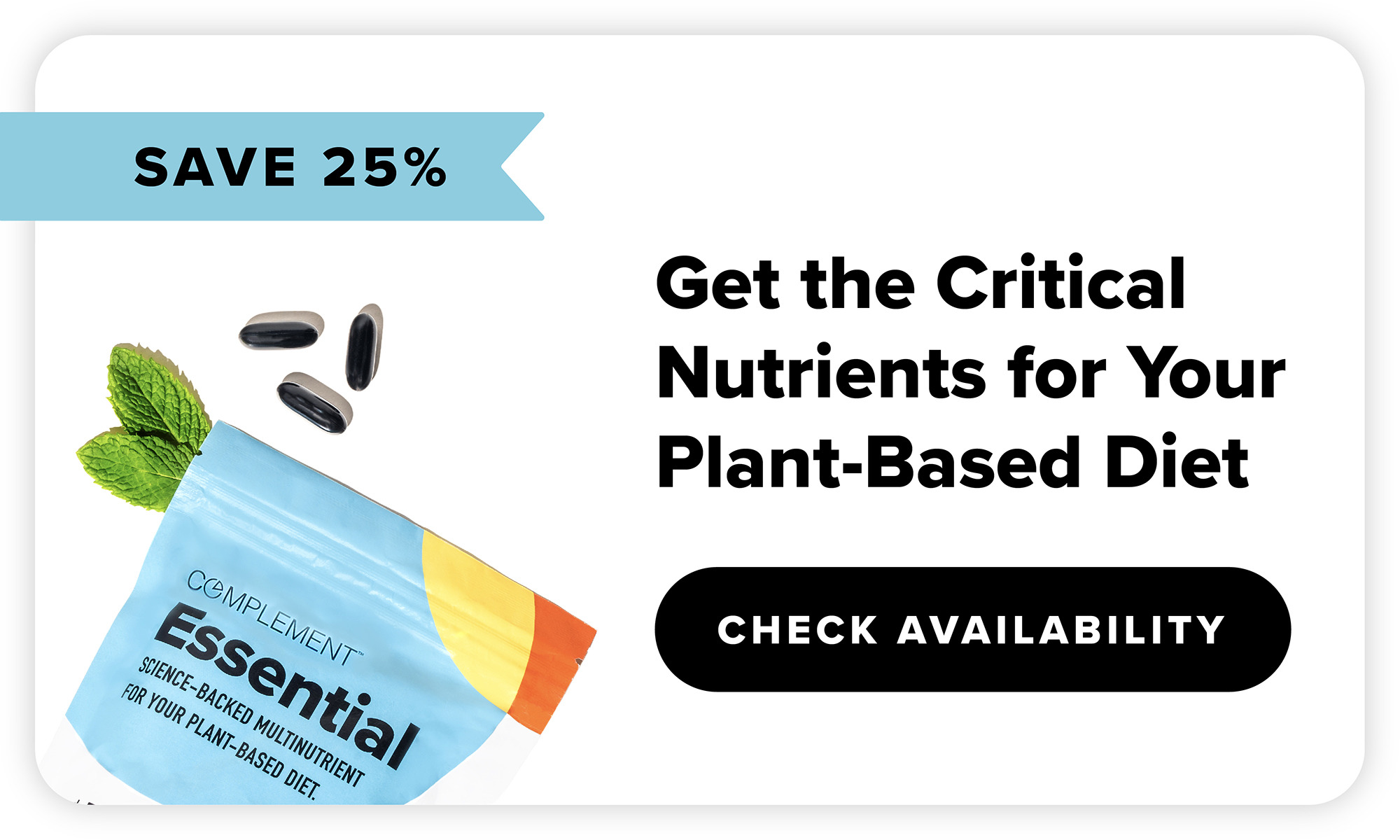 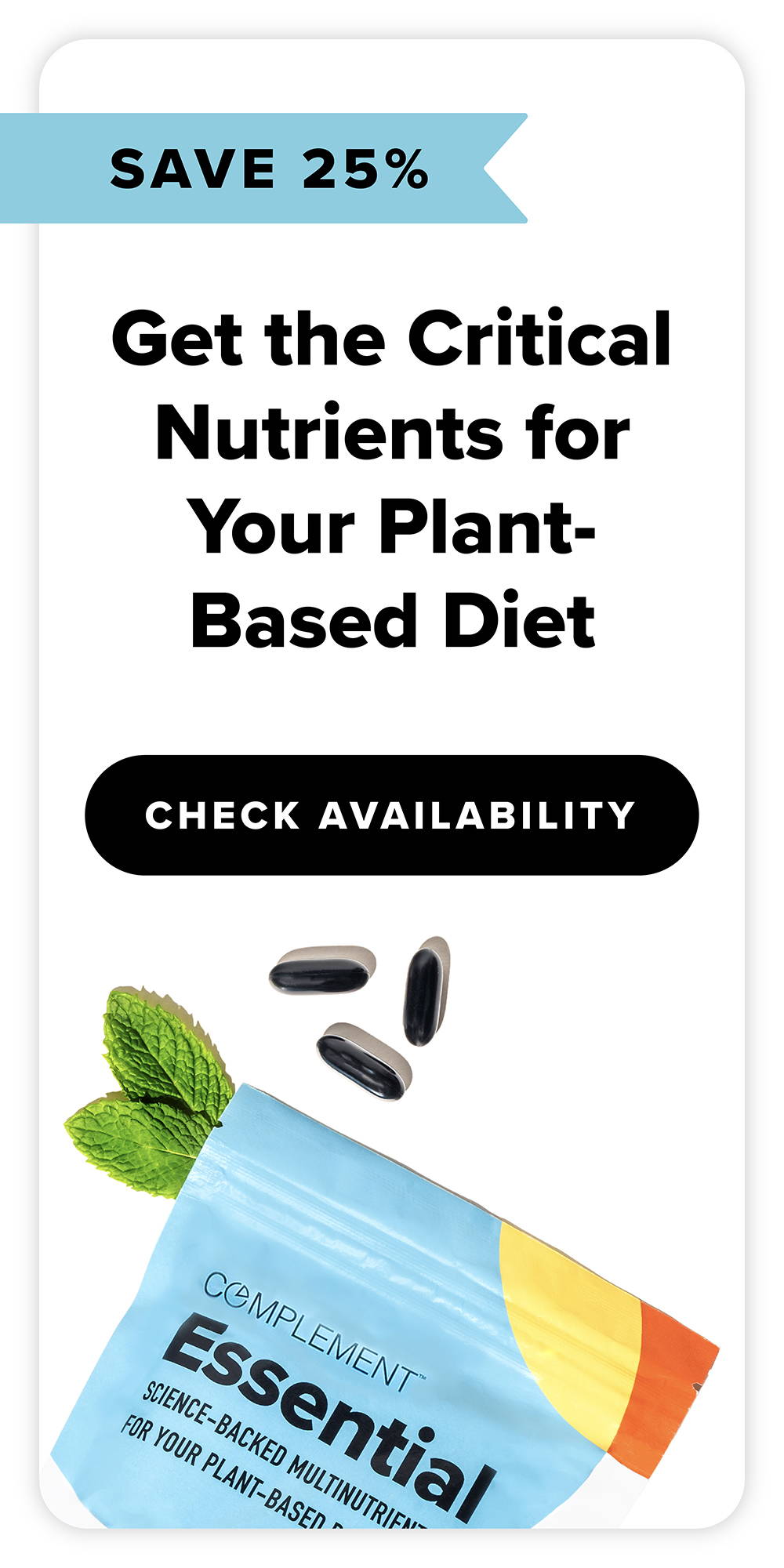 Based on No reviews

* The statements on this website have not been evaluated by the Food and Drug Administration. These products are not intended to diagnose, treat, cure, or prevent any disease.

Within a week of using Complement I had less hair loss in the shower! I was so surprised but thankful because no one wants to lose their hair. I am also seeing more nail growth too. I highly recommend these to vegans and non vegan friends.

Supplements do work am seeing visible results in my hair and nails growing faster then I’ve seen in a long while.

These vitamins are perfect for my vegan eating. Auto ship makes sure you have your product on time.

I like the confidence that this supplement is just what I need on a plant based diet..

I've been reluctant to take vitamins except for B12 since I'm a vegan and in excellent health. But after watching and learning about this brand and all the good vitamins and minerals in it and no fillers I thought I'd try it. I am pleasantly pleased with the vitamins. I like the "black" look and flavor. It's only been a couple of weeks but I hope it is helping to strengthen my immune system. I will continue with this product. I trust the source who it came from Dr. John Robbins.