A well-rounded, plant-based approach to nutrition is healthy and sustainable, but like every diet, it has its shortcomings. It’s widely known that plant-based eaters can have low levels of vitamin B12, vitamin D3, omega-3 fatty acids, and other nutrients. So how can you be sure you’re getting enough?

We created the Complement Essential multivitamin to help solve the dilemma of how to get enough key nutrients on a plant-based diet, but we wanted to go beyond that and o er an individualized approach to nutrition.

Why do vitamins and mineral deficiencies manifest in these ways?

Take omega-3s, for example. Without enough omega-3s, your brain can’t function at its best, showing up as symptoms like brain fog, low concentration, and memory loss. These essential fatty acids support proper blood flow to the brain, making sure our cognitive and memory functions are operating at optimal levels.

Take control of your health.

If you’ve been a plant-based eater for a while, you may have asked yourself some similar questions:

Why am I feeling so tired even though I’m eating a healthy plant-based diet?

Are all those nuts and seeds that I’ve been eating helping my heart-health?

How are my hair and nails still so brittle if I’m juicing every morning?

Are my current supplements giving me all the nutrients I actually need?

Identify root causes
and start healing
yourself from the
inside out.

that offer peace of mind, knowing your answers are backed by sound science.

Fast feedback
on your nutrition,

so you can troubleshoot any imbalances before they become health hazards.

to address your exact nutritional requirements and optimize your plant-based lifestyle.

to ensure you’re catching deficiencies early on and constantly adapting your nutrition to fit your body’s evolving needs.

From Our Founder
Matt Tullman

“When I made the switch to a plant-based diet, it did not go smoothly. About 2 years in, I had low energy and poor focus, and just felt like something was off. Then my fingernails started to peel off…

That’s when I knew something was wrong.

I didn’t know how wrong until I visited my doctor and received a diagnosis of ‘systemic rheumatoid-like inflammation.’ He suggested that I see a specialist to get hormone therapy or other pharmaceutical drugs.

And most of all, he said that I needed to stop eating a vegan diet, that I was likely deficient in many things, like Omega-3’s.

I’m a fairly stubborn person, so I dug deeper with micronutrient testing, and discovered that my plant-based diet was missing some key nutrients – namely Omega-3’s EPA and DHA, B12, and Vitamin D.

So we created Complement and started yelling from the rooftops to ensure that other plant-based eaters didn’t find themselves in this same situation.

And today I’m thrilled to share the future of our work: To make sure you never end up in a doctor’s office being told that you’re deficient in some nutrient and should change the way you eat…because the strength of our plant-based movement relies on the strength of each individual in our community!

And that’s why we’re excited to share Complement Insight – so that fellow plant-based eaters can have the knowledge they need to thrive and the means to achieve it.

Because I’ve seen the benefits of testing micronutrients and biomarkers year after year. Most recently, I found that I have high homocysteine (which contributes to heart disease) due to a genetic trait.

With this knowledge, and by optimizing our daily nutrient regime, I was able to lower my homocysteine levels by more than 30% by just adding Alpha-lipoic acid for the past 3 months. (ALA is more available from red meat and other foods that I don’t eat.)

This is the sort of active engagement, end-to-end personalization, and continual optimization that we’re now able to deliver to our community.” 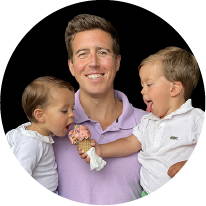 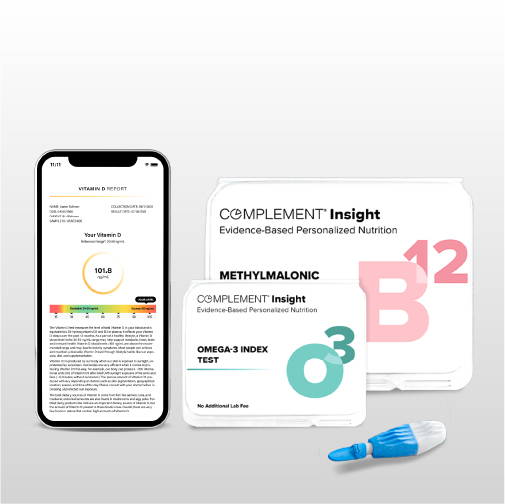 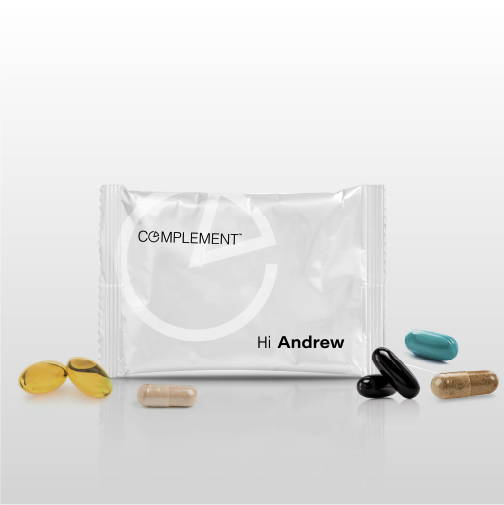 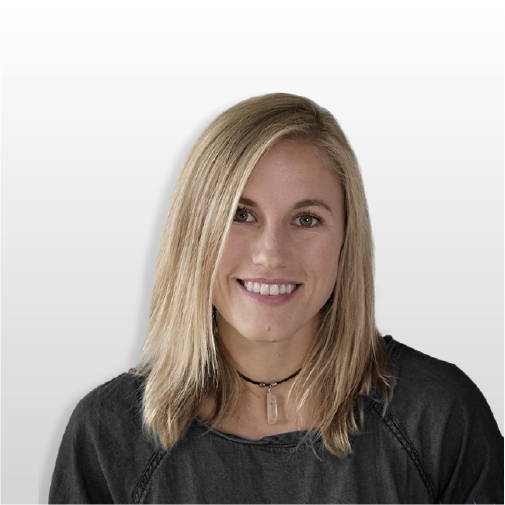 Why not just get a blood test from a doctor?

We could take the common industry approach and cram dozens of greens and additives into our formula so that it looks good on the bag. But if we did that, and maintain a reasonable serving size, we'd have to cut back on all the good stuff!

What does the Insight test kit include?

We could take the common industry approach and cram dozens of greens and additives into our formula so that it looks good on the bag. But if we did that, and maintain a reasonable serving size, we'd have to cut back on all the good stuff!

Does the test hurt?

How long will my results take?

As simple as it is to get greens, let's be honest... most of us aren't getting enough.

Dr. Michael Greger recommends at least 12 servings of greens per week, but only 1 in 25 of us get that many greens PER MONTH.

Daily Greens is not only an easy way to add more greens into your diet, but it contains five hand-selected, science-backed greens, most of which you almost certainly aren't consuming with any regularity.

Do I have to order Complement Essential separately from Insight?

Mix with water, blended into a smoothie, combined with juice. Just one scoop of Daily Greens per day will provide a powerful dose of vitamins and minerals for short- and long-term benefits.

Will I be able to read my results? Or will I have to take them to a doctor?

Where are my tests sent?

Oh, there's a money-back guarantee alright! If you're not happy at any point in the first 100 days, we'll issue a full 100% money-back guarantee. No question. No fine print. Just contact our customer happiness team (team@lovecomplement.com) to start your return!

(This goes for all Complement products, by the way.)

Is my data safe?

Oh, there's a money-back guarantee alright! If you're not happy at any point in the first 100 days, we'll issue a full 100% money-back guarantee. No question. No fine print. Just contact our customer happiness team (team@lovecomplement.com) to start your return!

(This goes for all Complement products, by the way.)